Small Beginnings – Where it All Began

I always wanted to make things.

My earliest sewing memory is when I was four years old. The elderly lady who lived next door gave my mother two small pale blue blankets in a sort of wool fleece fabric.

I announced that I wanted to make a dressing gown for my little sister from them.

My grandmother laid the two little blankets, one on top of the other, on the carpet and threaded a needle for me with double thread and a knot. She (very wisely) said I must sew the sides together first and that any cutting would happen at the end.

I remember taking the first stitch at one end. Then I looked at how far I had to sew and could see no point at all in doing lots of small stitches when I could get all the way to the other end with one big stitch.

I took one big stitch. My grandmother pointed out the error of my ways.

It was then that I decided my sister didn’t need a dressing gown after all. The two little blankets survived. 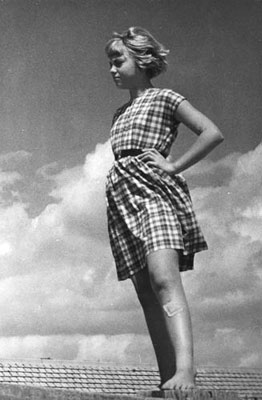 At school we were taught sewing by a spinster teacher who had lived through two World Wars. She wasted nothing. We even had to remove tacking stitches keeping the thread in one piece so that we might re-use it.

When I was nine we made stuffed animals. I recall making a giraffe in a cotton gingham fabric in shades of orange and green. Its legs were very thin and they were given strength by a length of wire embedded inside the stuffing.

When I was ten we each made a pair of knickers in cream winceyette using French seams and shell hemming – all done by hand.

Needless to say, none of us ever actually wore what we’d made that year as bloomers were long out of fashion.

At eleven I made my first dress. Mine was in a check fabric in shades of green and brown. All the sewing was done by hand – there were no sewing machines at school. In contrast to the knickers of the previous year, I loved that dress and wore it all through that summer.

In my teens I made myself the latest fashions by buying clothes at the village jumble sale and cutting them up to make something else. Fortunately I grew up in a place where the landed gentry donated their unwanted clothes to the jumble sales so pickings were good.

To begin with I used my grandmother’s Singer sewing machine with the handle that was turned by hand. Then one day when I was about fourteen years old my parents visited the Ideal Home Exhibition and brought home an electric machine that did a zigzag stitch. I was in heaven.

I made my own wedding dress, my sister’s and numerous bridesmaid dresses for various family members over the years. More recently I made my daughter’s. 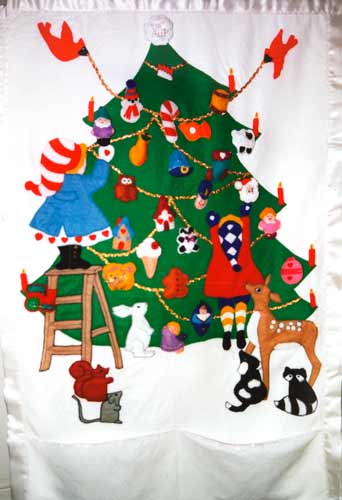 By the time I was raising my own children ready made clothes were becoming cheaper to buy than making them at home. I only then made special occasion garments such as party dresses or fancy dress outfits.

I also made toys – appliquéd picture books and advent calendars, stuffed animals, dolls, etc. As well as the usual things for the home such as curtains, I remember making duvets in the late 1970s.

Duvets were a new thing in the UK. I couldn’t afford to buy each of us a ready-made one so I bought kits. Making a synthetically-filled duvet had to be one of the most tedious jobs I ever took on – but worth it. Afterwards, instead of having to straighten and tuck in six lots of sheets and blankets it was now all done in six shakes!

During the 1970s a few family members spent time in hospital and I made several quilted bed jackets in polyester satin. These proved very popular at the time and several relatives who weren’t unwell asked me to make one for them too.

By the time the children had all grown up I was back at work. Although I still made things now and then, I started to look forward to retirement when I might devote my days to creating…

Those days are here.

I can now spend my time making whatever I want. Sometimes I knit, sometimes I sew. In between times I make necklaces and decorate boxes. I can’t just do one thing as there are so many possibilities, so many ideas that beg to be followed through.